When a Weed is not a Weed 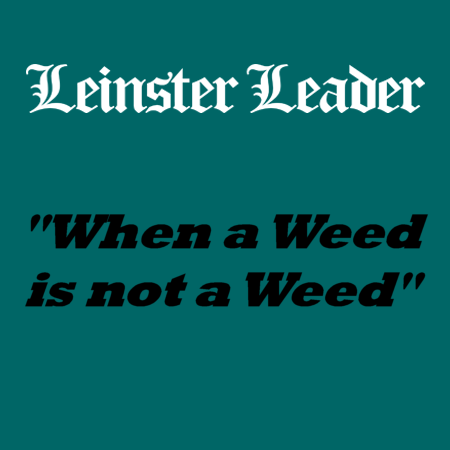 A simple fact about a nettle or a dandelion not often universally accepted is a weed is simply a plant growing in the wrong place.Furthermore if the above named plants “growing long and lovely and lush “as the poet Gerard Manly Hopkins fondly declares are elevated to the status of herb then they are nobly engaged in the service of all mankind.

With the ever encroaching foothold gained by the pharmaceutical giants of today’s western world ,we can, I suppose, be forgiven for our blinkered view of what cures us.To view medicine merely in drug terms is to embrace a certain paradigm.What we forget is about third of western drugs is derived from herbs.For example aspirin although now in synthetic form is derived from the white willow and the field and hedgerow plant meadowsweet..Luckily for Hoffman La Roche and Pfizer as they potentise phytochemicals, plants are ignorant of copyright!

Hippocrates in 400BC is reputed to have said “Let food be thy medicine and medicine be thy food”ONE MIGHT WELL ASK IF ONE DIDN’T KNOW BETTER WHERE DOES THIS COMPLEMENTARY THERAPIST PRACTISE?!We are told to eat the rainbow and Im not talking Judy Garland here, rather the myriad coloured alchemists AKA fruit and vegetables which give us water,carbohydrates,fibre,vitamins minerals and antioxidants.We have many plants we term culinary herbs{.Some of them like fennel and garlic are also vegetables.}These include ginger,cinnamon,garlic,black pepper,marjoram,oregano,coriander,rosemary,sage thyme and parsley.All have exciting medicinal properties and as an addition to our cooking they stealthily provide free health insurance in a recession.

In the middle ages, no self respecting household would be without a herb garden.You see they didn’t have the HSE VHI or AVIVA back then.Folk from the fifth to the 15th century did actually have antibiotics,antacids,antifungals,hypoglycaemics,antiinflammatories.They just had no idea.The plant remedies simply cured the ague{Fever} or the fluxes{dysentry}Admittedly they had bubonic plague but this was down to appalling overcrowding and deplorable hygiene.

You may wonder where the antibiotics of that period came from? Try garlic, anti bacterial, anti viral, anti fungal.What about the anti inflammatories .Try wild meadow sweet and ginger which is also anti emetic{helps with nausea}.Granted ginger would have been a later arrival from the orient but lets follow on with Scarborough Fair …”parsley ,sage rosemary and thyme.”Parsley is diuretic, helps ease arthritis and may be anti cancer.Sage is a valuable menopausal herb helping with hot flushes.It is also carminative{allowing the digestive system to work with greater ease}Rosemary is a friend to the elderly, asisting with memory, circulation and digestion.Thyme is an expectorant[brings up phlegm and mucous}is antibacterial and assists digestion.Now you didn’t know you had such close ties with your ancestors from the middle ages did you?.Next time you’re in the doctors surgery listening to a symphony of coughs and wheezes, think of them. Ask for their guidance with a herb garden , definitely cheaper, saves the surgery queue!

Irish folklore abounds with tales of mysterious folk who had “the cure” for ailments .Dandelion, nettle plantain, willow,self heal, elder,birch,hawthorn, oak, meadowsweet, to name but a few had various parts of them used fresh in season ,or harvested, dried and stored .These woodland people are followed on by a more eclectic bunch of modern day Irish herbalists with a wide variety of herbs and herbal traditions from all over the world at their disposal.

What do herbs treat ?The answer is almost any illness, including digestive ailments of all kinds, insomnia,fatigue,headache stress,arthritis,poor immunity respiratory diseases and menstrual problems.Are they safe?Absolutely.Adverse reactions can occur ,as with any chemicals, even plant based ,but if and when they do arise, they are not serious and if the herb is discontinued the problem is solved .It’ s not to be forgotten that the modern day herbalist does extensive training and brings a high degree of professionalism to bear.He or she will never suggest an either or approach to treatment{medical or herbal} is well aware of potential drug herb interactions and will always err on the side of safety when prescribing.

Herbs come in many guises, as an infusion{tea} or a decoction {:basically a simmered tea}.One of the most effective ways to take them is as a tincture,where crushed or ground herb is immersed in alcohol, thereby extracting all the plant chemicals.Other methods of ingestion are as lozenges and encapsulated powders.Topically they can be applied as a cream, ointment, infused oil, a liniment{a rub} and as a poultice.There are also compresses and soaks .A bath soak of rosemary and epsom salts is excellent for circulation.

Some herbs have been researched,such as astragalus, echinacea ,ginkgo biloba and st johns wort.Several more sadly have the x factor with no scientific Mr Cowell to advance their cause.75% of the world’s population use herbal medicine.1400 plants with potential cancer cures it is said, await discovery in tropical ranforests .This bountiful crop must be harvested .The undiscovered awaits.” As the great Sherlock Holmes might have said “Its axiomatic my dear Watson”