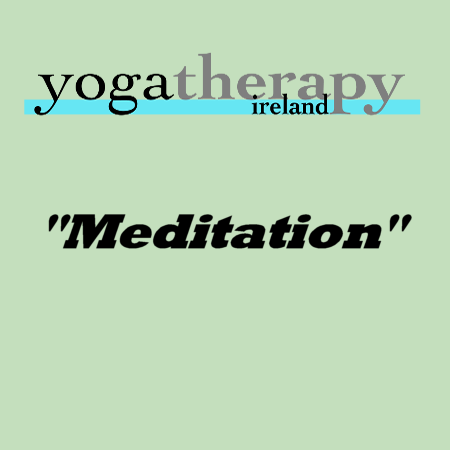 The word meditation has its root in the latin word mederi which means to heal .This indeed seems a disconnect with the modern usage of the word but  viewing it  as  it were from the root up I find  it to be rather fascinating.How does one define meditation?Does it mean sitting crosslegged in an ashram in India chanting as a group in unison?or sitting at home under a tent repeating some sonorous sound out loud much to the disconcertment of the neighbours through paper thin walls?!There are so many stereotypical views of meditation and indeed the meditator that the whole area needs a perceptual disassembling simply to uncover the truth and in so doing elevate this ancient art  and way of being to the level of public consciousness that it deserves.

Meditation is a practice, a discipline whereby one quietens the inner chatter of the mind and enters a state of expanded awareness remaining calm centred and alert.When one remains concentrated on a state of alert stillness Gabriel Weiss and author of “The healing power of meditation”says something special happens “Stillness speaks”According to Eckhart Tolle in “A new Earth” this shift in consciousness is a type of awakening .

The Zen Buddhists say we have woken up from a dream.The Hindu tradition would see the hum drum daily life as a waking dream.Again Aboriginal culture reiterates this concept .How can meditation in its many guises help us recognise the illusory and re connect with our very essence?How may it ground us so we become aware of what the poet Kabir describes as “the wanting creature” within us?Once aware of our thoughts,fears and emotions as the stuff of our desires and often a selfstyled blueprint for living for better or worse something happens to us.For the first time we recognise thoughts as just thoughts , feelings as just feelings.Through quietening the mind we become so to speak observers on the river bank  of our own lives allowing these said thoughts and feelings to pass by without engagingwith them.Neither do we seek to block them.

John Kabat Zinn in his book Full Catastrophe Living speaks of sitting down to meditate with intention and attention.He speaks of a foundational attitude of kindliness and friendliness towards ourselves.In what he terms a sitting meditation, one begins by sitting either in the normal sitting position or the typical crosslegged pose.Now bring awareness to your breath.Follow the breath all the way in as  it enters the body, through the  nostrils,then into the  chest and finally the abdomen.Then gently track its progress outwards observing the beginning middle and end of the exhalation.The meditator then attempts to stay focused on the breath using it as an anchor for the mind.When thinking  reasserts itself as is normal, one must not get angry at the intrusion but gently time and again with a lot of self compassion return to the breath.For the beginner,the analogy may be used of a horse whisperer who may tame the horse through sheer force or alternatively just let him run and rear up as he will simply observing him calmly.Then the horse whisperer turns away and eventually the horse gives up and curiously follows the trainer  allowing the halter to be gently placed around his neck.For the new meditator thoughts can be “the wild horse” and very difficult to subdue.This should be viewed compasionately and non judgementally.In fact thoughts can even be named, for example ,home thoughts, work thoughts, happy thoughts ,sad thoughts etc.

Eventually, thoughts become like the horse, more easily tamed .This takes time  and  again the word non judgemental apears.One shouldn’t judge ones efforts.After all the mind hates a vacuum and all sorts of files present themselves for opening now that that we’re not busy!In fact one new meditator I know remarked, not only do  unwanted thoughts present themselves, they positively queue up once he sits down!This does not mean that meditation is only for a select few with excellent concentration.It is a discipline like any other, except this discipline leads us home to our true selves.So often we speak of leading our lives but in fact we should consider following our lives in a more organic way and this  is what meditation can show us if we allow ourselves to be led. The quiter the mind the more we are connected to the ever present and unchanging, which is  always there for our consideration and  which is our true home .Unfortunately, most of the time, we run around never coming home to who we truly are.We remain perpetually distracted by and immersed in externals.We run from pleasure to pleasure, mountain peak to mountain peak eschewing the valleys.In mindfulness meditation we are encouraged through present moment aawareness, to open up to difficulties with an attitude of  kindness and above all compassion towards ourelves.The only way out literally is through.We sit with an ever increasing reverence for the life flow always emerging in and through us.

Mantra meditation is probably the other great Eastern method of  coming home to our true selves.In the Hindu  philosophy two selves are referred to , the small self or ego (which is the I) and the greater self (with a capital s) which is the Soul ,the Brahman or the Atman.We are encouraged through medtation to leave the separateness of the ego behind and merge with the greater Self .In whats known as Advaita philosophy or non dualism we are seen as one with the spirit or one with the universe.We are all truly truth, consciousness and bliss .Unfortunately this innate perfection of our being has been covered over by life but meditation takes us on a journey not forward to what sounds like a nebulous goal but back into ourselves where we uncover this hidden but never lost  true Self..

Mantras are usually based on a pure resonant sound(invoking the Divine)such as Om  or Ram.These sounds vibrate in the mind  as anchors to return to again and again as thoughts attempt to intrude on our consciousness .Gently and gradually the mantra can be released as we merge silently in our minds into the great oneness of our true self.Again there are perils for the new meditator as he or she atempts to” whip the mantra into shape!”or pass it along a conveyor belt hoping for some result at the end .The mantra should be sounded carefully giving due attention to each individual repetition  in the mind so the effect goes deep and has an effect which is vertical as opposed to horizontal.This helps it to dissolve and merge appropriately like sugar in our tea.We may return to it at any time when concentration fades,Initially the mind will challenge this non doing and restlessness or sleepiness may occur.If either of these are experienced it may be wise to do some yoga excercises first to bring the body to stillness and also energise it.Cold water may be poured on the face if sleepiness persists.John Kabat Zinn says we should do whatever it takes to help us fall into a state of wakefulness.We should treat our efforts as if our life depends upon it which arguably it does

There are several different types of meditation including chakra meditation, meditation on an object, meditation with a candle flame ,creative meditations(Where the meditator visualises perhaps enhanced well being and life flowing as the meditator would desire.)For the purposes of this article I have dealt with the two great eastern traditions of Buddhism and Hinduism.

What are the  scientifically measurable benefits to us of meditation?.Deepak Chopra MD states clearly that meditators make only 25% of  visits to their gp that non meditators make . In studies which were conducted ,meditators had 87.3%fewer admissions to hospital for heart disease  and 55.4%fewer admissions for benign and malignant tumours of all types.Blood pressure and cholesterol levels have also been shown to be significantly reduced by meditation.This is extremely important in terms of life expectancy.Anxiety depression and addiction have also alll benefitted significantly.

Clearly sitting down and coming into the well of our own being impacts not just on our mental and emotional health, but on our physical health also and since any disconnect between body and mind is a myth anyway, why wouldn’t it?  Meditation can be a great ally in times of personal crisis but obviously one mustn’t start the practice when the crisis begins.It must be a bedrock in ones life all along.Just as rice is a staple diet in many world populations I would advise meditation as another staple.Many people think it is perhaps escaping from reality and entering a type of Nirvana.It is in fact none of these things.John Kabat Zinn refers to it as a state of non reactive,  nonconceptual, choiceless awareness.We embrace our true reality as opposed to all the externals of form and identity which often plague and confuse us in the swirl of life.We already are everything we hope to attain.We must not polish the brass.Really all one needs to do in meditative awareness is to carefuly remove the layers and let its true beauty shine.